Whoflungdung Trial Reveals an Increase in Bugs and Biological Activity 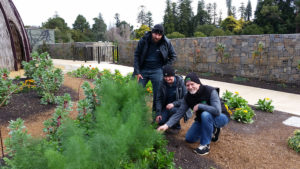 If you read our December newsletter, you may recall we were excited to launch a brand new trial of our incredible new super-mulch ‘Whoflungdung’ in the Kitchen Garden of the Adelaide Botanic Gardens.

In previous trials, Whoflungdung has shown outstanding results for weed suppression, moisture retention in the soil and keeping blackbirds at bay, and we were excited to see what this next round of trials would bring. We were also keen to discover the influence Whoflungdung had on nutrient and biological activity in the soil.

The Whoflungdung results are in…

For this trial, we were given an area of just over 30sqm – half of which received Whoflungdung and the other half which received a competitors mulch product. Both mulches were applied at a cost for cost basis.

We found that both products significantly improved the soil nutrient balance, with Whoflungdung and our competitors mulch each returning different micronutrients to the soil. In all cases, the mulches added significant nutrients across the board.

The biggest difference was seen in the biological activity of the soil, which is where Whoflungdung really outshone the competition.

While the total number of microbes was increased in both treatments, the level of activity was only enhanced in the Whoflungdung application.

Overall, we’re thrilled with the results and are super proud of our mega-mulch, which has proved its power yet again! If you’d like to get your hands on Whoflungdung, check out our list of excellent stockists and see what this super mulch can do for your garden.