Results are in on Whoflungdung Trial with Adelaide City Council 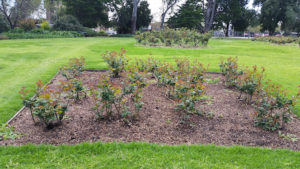 Our powerful new super-mulch, Whoflungdung, is available to buy in retail outlets this month, and to prove just how potent and nutrient rich Whoflungdung is, we’ve been putting this fantastic new product to the test in multiple trials throughout South Australia. 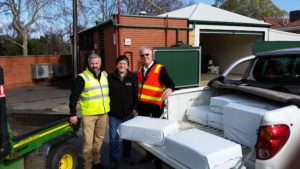 We wanted to see how Whoflungdung performed during the rose growing period in spring, so from August to November 2017, we put Whoflungdung to the test in Rymill Park, eager to see if our super-mulch had any benefits when compared to the standard pea straw that is commonly applied to rose beds. The purpose of this trial was to observe any difference in the growth and health of the plants, to examine weed suppression of the mulches, and to determine the impact these types of mulch have on the nutrient and biological activity of the soil.

As part of the trial, Whoflungdung was applied to one 20sqm trial area in Rymill Park, while pea straw was applied to another trial area of the same size, with both plots each containing approximately 25 rose plants. The rose gardens were examined once a month, with no obvious differences observed between the growth of the plants on either plot. However, when it came time to testing the nutrient levels of the soils, the plot containing Whoflungdung was the clear winner.

Results of the trial:

These results compliment our previous trials nicely, as Whoflungdung has already proven to be excellent at weed suppression and moisture retention in the soil, while successfully deterring blackbirds from digging in garden beds. The trials continue at the Botanic Garden, and you can now pick up Whoflungdung in 20kg bales from Neutrog Whoflungdung retail suppliers to put our super-mulch to the test for yourself.