Written by Dr. Jacinta Burke on behalf of the Rose Society of Victoria.

The lazy days of summer are here but now is not the time to forget about your roses. There will still be plenty of magnificent blooms coming on your plants. It is great to be able to go out into the garden and pick a lovely bunch of roses to bring into the house or give to a friend. There are still some tasks that need to be done over summer to keep your roses looking their best.

Roses are hardy plants and can get by with very little water. But if only provided with minimal watering such as in a drought, growth will be reduced and flowering will be sparse. For best results, it is wise to keep the soil around your roses evenly moist. Roses will respond much better to a deep soaking once a week rather than light watering each day. It is preferable to encourage the roots to go deeper into the soil where it is cooler and the moisture is retained. If repeatedly watered lightly, the roots will stay near the surface where they risk getting overheated and drying out on hot days. While mulch will reduce the impact of a hot day, roots will fare much better if deep underground where it is cool and moist.

Some people like to water by hand. This is time-consuming and can be wasteful. There is the added disadvantage of leaving leaves wet overnight thus inviting attack by disease-producing fungi. If you must water by hand, do it in the morning so that leaves have time to dry before sunset. Alternatively, watering can be done by an irrigation system with drippers placed strategically on the ground. This will give a more even distribution of water and will not splash up onto the foliage. If you haven’t already mulched, it is time now to do it before the soil dries out. Spring rains will have built up the soil moisture but now that Summer is here it will soon be depleted. For mulch to be effective, it must be 10 -12 cm deep. Before applying mulch ensure that the soil is evenly moist. There are many suitable mulches on the market including lucerne, straw, pea straw or wood chips. If using wood chips, it will be necessary to add a nitrogenous fertiliser such as Meatworks Blood & Bone from Neutrog to prevent your roses being nitrogen deficient as bacteria break down the wood chips. Another product that is proving to be very useful is Whoflungdung. This attractive mulch has the added advantage of being partially composted and can provide nutrients to your roses. While it may smell for a few days it seems not to be liked by blackbirds.

Diseases like Black Spot and Powdery Mildew are best dealt with preventatively. Once the fungus has entered the plant it is too late. The fungus will proliferate in the plant tissue ultimately resulting in its death. For Black Spot, initially, black spots with yellow-fringed edges, up to 12 mm across, will appear on the leaves of affected bushes. These affected leaves will eventually become yellow and fall off. If left untreated, Black Spot can cause a rose bush to completely defoliate.

Early symptoms of Powdery Mildew can include red blister-like areas on the upper leaf surface, followed by a white, powdery growth on the aerial parts of the plant. Powdery Mildew is sometimes confused with Downy Mildew, which occurs on the underside of the leaves. Though the fungus can infect any part of the plant, younger, more succulent tissue typically shows the first signs of disease. The fungus can also infect the flowers, sepals, and unopened buds.

The best approach to treating these diseases is to not let it happen in the first place. Spraying every 7 – 10 days with Eco Rose or Eco Fungicide will prevent the diseases from taking hold. It is important to spray the entire plant, especially under the leaves for this program to be effective. Do not spray when the temperature is forecast to be over 27°C or if rain is imminent. If it does rain, you will need to spray again because the protective coating will have been washed away.

Aphids which were abundant during Spring will continue to make their presence felt over Summer. Initially, the aphids that appeared in Spring hatched from eggs that had over-wintered on the stems of the rose bush or in crevices in the bark. In mild winters some adults will also have survived and continued to slowly reproduce. The recently hatched aphids rapidly mature going through four moults before reaching adulthood. Once the females are mature, they give birth to live young females (nymphs) without the need to mate with a male – a process known as parthenogenesis. This results in a rapid explosion of aphid numbers. Nymphs and adults feed on rose plant juices, attacking leaves, stems, buds and flowers. Most especially, they like succulent new red purplish growth.

A number of control methods can be employed. If the aphid numbers are not too great, it is possible to squash them between your fingers. Alternatively, a jet of water can dislodge them from the shoots. If numbers are large, they can be sprayed with Eco Oil and/or Eco Neem oil. Both of these are eco-friendly. Pyrethrum can also be used but do not use when bees are around. If numbers are not out of hand, it is possible to leave the aphids to the parasitic wasps. In the early 1990s, scientists at the Waite Agricultural Research Institute at the University of Adelaide introduced a specific biological control method for the rose aphid. It is a tiny little parasitic wasp called Aphidius rosae. These parasitic wasps lay their eggs inside the body of the aphid, the larva then eventually it eats its way out from the inside and leaves a shiny brown paper-like skin called a mummy. Look for evidence of these mummies before you think about spraying. The parasitic wasps will soon have the aphids under control if you do not spray. In fact, spraying will kill useful insects like the parasitic wasps.

The warm, dry days of summer will also see the proliferation of two-spotted mites. It is best to deal with these as soon as they are evident. Left unchecked they can quickly defoliate the rose plant. Evidence of these pests can be seen as a sandy and bronze discolouration of foliage as well as webbing. A magnifying glass can be used to view the undersides of the leaves which will show a messy, dirty look with tiny red-spotted mites crawling around. The pests can be controlled by spraying thoroughly with Eco Oil. It is essential to get a good coverage of the undersides of the leaves as this is where they tend to congregate. Repeat at weekly intervals for three weeks to ensure that you kill newly-hatched individuals. 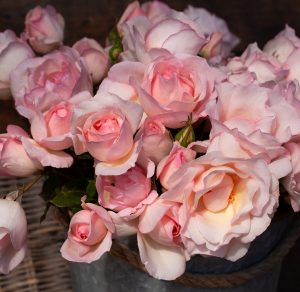 Continue to remove spent flowers by cutting just above the node of the first five-leaflet leaf from the apex. This will encourage strong new shoots, which will flower in about six weeks. To get ready for an abundance of Autumn blooms, it is a good idea to do a summer prune and feed. To get ready for this, do a deep watering of your rose plants in the last week of January, then feed with Sudden Impact for Roses. It is also a good idea to apply some GOGO Juice to enhance microbial activity in the soil. Water again. In the first week or two of February do your summer prune. If you have more than one plant of a particular variety, stagger your pruning over a week to ten days. If you only have one plant of a variety, prune different parts of the plant over that same time. To do a summer trim, prune to a well-developed outward-pointing bud. This will ensure that you will have an abundance of blooms for the first two weeks of April, which is considered to be the best time for Autumn blooms. It is beneficial to also give another light feed of Sudden Impact for Roses together with GOGO Juice again in early March just to stimulate the growth of the new shoots.

December to February is a good time for budding as the weather is hot and dry. It is important to have the sap flowing well in the understocks by watering them consistently prior to the budding process. Ideally, the understock should be about 12 mm in diameter. The budding wood should be from a stem which has borne a good flower. Keep the stems of the bud wood in water prior to budding. Choose an eye (bud) that is about midway down the stem, eyes low on the stem tend to be immature. After budding, keep the understock well-watered. The eye should begin to swell in two to three weeks. After this time remove the upper part of the stock well above the budding. This will allow the bud to develop more quickly.